Sidebar second
With a new manufacturing facility planned that would be dedicated to the assembly of heavy industrial blowers and fans, New York Blower approached Hoosier Crane Service Company, its long-time crane service and installation partner, for help.

The Application: Since 1889, architects and engineers have been turning to The New York Blower Company to make industrial buildings, subways and commercial spaces safe and comfortable. A manufacturer of commercial and industrial fans and blowers, New York Blower creates equipment that removes pollutants, collects dust and regulates temperature. Over the years, as the need for air handling and pollution control has grown, so too has New York Blower’s business.

In 2017, New York Blower undertook a significant expansion, breaking ground on a 30,000-square-foot manufacturing facility in New Castle, Pennsylvania. The new assembly plant would be the birthplace of New York Blower’s largest fans and components, some with diameters of 16 feet and weighing nearly 40 tons. Once completed, the new plant would allow the company to serve heavy industrial customers, a new market for New York Blower that could add as much as 30 percent to the company’s topline revenue, said Jason McShane, New York Blower’s facilities manager.

The Challenge: Building fans the size of elephants requires specialized methods, McShane said. For example, a centrifugal industrial fan that moves thousands of cubic feet of air per minute is so large that it must be moved by a crane. As it’s moved, it also needs to be manipulated in three dimensions so that all sides of the fan housing can be accessed and welded – not an easy task when the fan’s housing assembly alone can weigh more than 20 tons.

Prior to building its New Castle facility, McShane said New York Blower would flip and turn smaller fan housings either by using a single crane with one hoist, which left room for safety errors and potential damage to the crane, or by using two separate cranes, but only if those cranes could be moved close enough together to make the load turn possible. Both were make-do solutions that were far from efficient. In the case of the single crane method, it required multiple workers to guide the housing into position and could cause damage to the crane if the fleet angle, the angle of the rope coming off the hoist, exceeded more than 4 degrees. In the case of two cranes working together, it also required at least two crane operators, not to mention at least two spotters (one for each crane) to ensure the load was in proper position at each moment. In either scenario, the cranes were not built to handle the stresses of load turning.

With a new manufacturing facility planned that would be dedicated to the assembly of heavy industrial blowers and fans, New York Blower approached Hoosier Crane Service Company, its long-time crane service and installation partner, for help.

The Solution: “We’ve worked with New York Blower to install and service chain hoists for its La Porte, Indiana, facility, but New Castle was a different kind of project,” said Hoosier Crane COO Todd Cook. “They were going to need to constantly move, flip and rotate the fan housings to do the welds, and we quickly realized that specialized, load-turning cranes were the answer.”

Load-turning cranes are designed for situations where heavy loads need to be rotated and flipped. Each crane incorporates two hoists to distribute the weight and make flipping the load possible. The operator attaches two hooks to the load, one on each side, which are in turn suspended by the separate hoists, call them hoist A and hoist B. To flip the load, hoist B lowers its hook until the load is completely suspended by hoist A. The load is then rotated 180 degrees around its vertical axis, reattached to hoist B, and lifted into the desired position.

Although many people do it, Cook said using standard hoists that are not designed for load turning is extremely dangerous because of side pulling and dynamic shocks that occur when the load suddenly turns.

“We’ve seen frames bend and wire rope assemblies break” Cook said. “People try to get the job done and they don’t realize that it’s almost impossible to turn loads safely. Trying to do that with a standard crane you’re likely to damage either the equipment or the load.”

When it became clear that a load-turning crane was what New York Blower needed, Cook said Hoosier Crane turned to R&M Materials Handling.

“R&M is a go-to solution for us,” Cook said. “They’ve done an excellent job of leading the industry … we can make things happen in a much cleaner procurement aspect, and the quality of R&M hoists has been phenomenal.”

R&M hoist and crane packages are shipped in a kit that includes every component, part, hardware piece and wiring harness needed, Cook said, which makes onsite assembly and installation fast and efficient.

A longtime supplier to Hoosier Crane, R&M worked with Cook’s team to design a solution especially for New York Blower.  Hoosier Crane produced four cranes with the R&M load-turning components for the New Castle facility, two with a 40-ton capacity and two with a 20-ton capacity. Each crane is equipped with important safety features that include:

Hoosier also outfitted each load-turning crane with radio controls that allow New York Blower workers to operate the crane from wherever they need to have the best viewing angle as they move the load.

The Result: With the four load-turning cranes installed by Hoosier Crane, McShane said New York Blower’s experience with the additional features provided in the R&M load-turning components was everything they had hoped for, and more.

“Our (New Castle) building was pretty much built around cranes because they are such an integral part of the process. So, if the cranes didn’t work, then the building would have been a waste,” McShane said. Luckily, he said, that was not a problem. Efficiency has reached levels that New York Blower did not expect, thanks to the quick and safe load turning. Fewer workers are required to turn the loads (one or two versus the four-to-six using the old methods), and each load turn is accomplished much faster.

“I don’t know the dollar amount yet, but it’s definitely saving us money,” McShane said. “We are 100 percent pleased with the final product.” 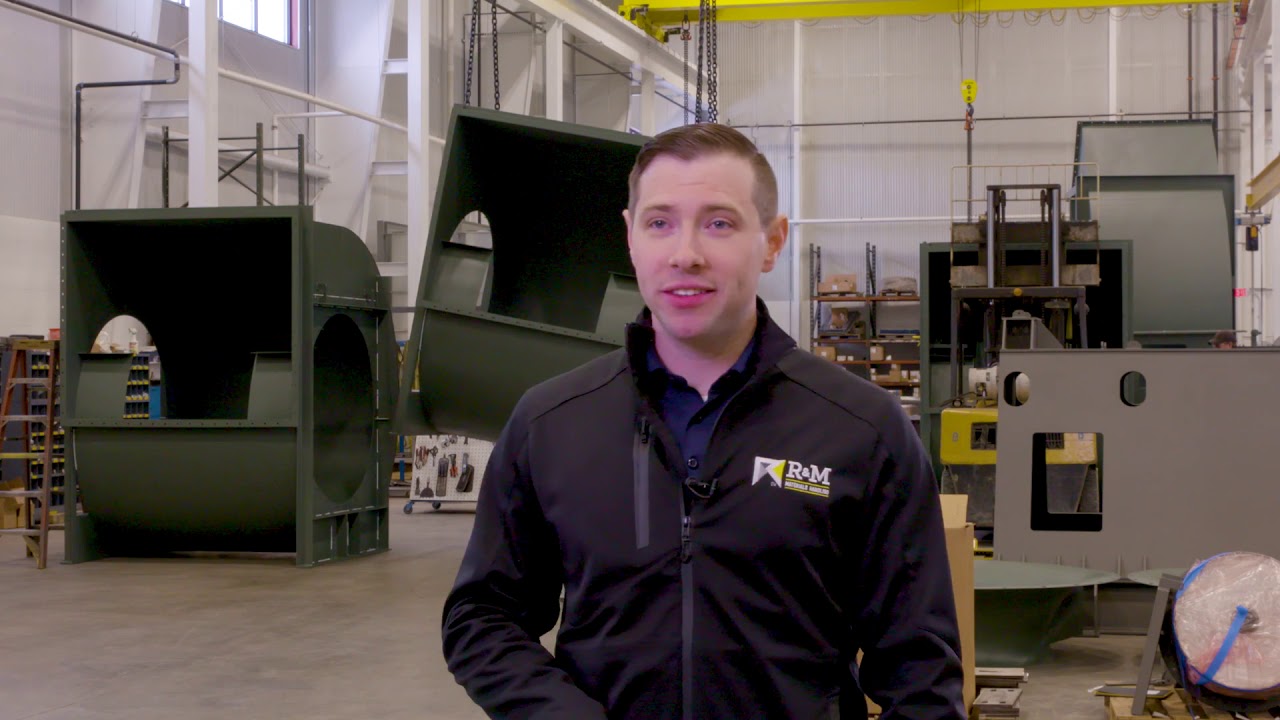